Fred and May Hemsworth 1942

"I was doing some genealogical research on my grandmother, Phyllis Travis, when I came across your beautiful photo of my Auntie May and Uncle Fred Hemsworth's wedding.

My grandmother was raised as May's sister, although she was a cousin, adopted by Elizabeth Travis when her parents died just after the turn of the last century. Phyllis moved to Canada in 1918 and her daughter (my mother) moved to Scotland after WW2 to marry an RAF navigator she had met when he was training in Moose Jaw, Saskatchewan. I was born in Scotland and many of my favourite childhood memories are of visited Auntie May and Uncle Fred in their home in Sheffield.

If you are interested I have several pictures of Fred and May taken in the mid forties to early 1950s. I have forwarded one in a seperate email to you of  the couple emerging from their bomb shelter in the back garden that they sent to my grandmother assuring her they were both well despite the German air raids on the Sheffield steel industry. The picture was taken in early 1942.

And this is the marvelous photo she sent 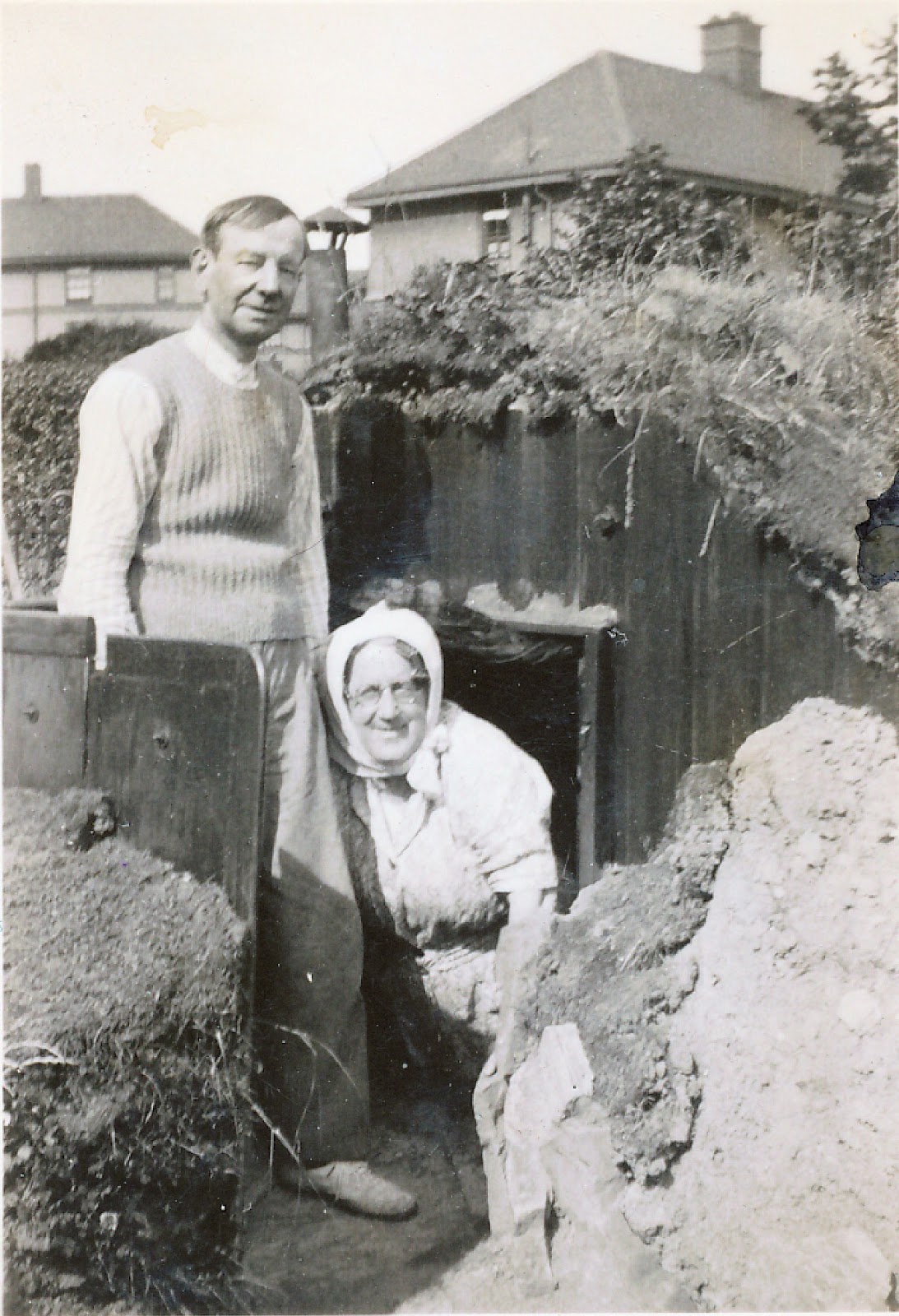 More information can be found at Fred and May's Page

And the shelter - the following is edited from Wikipedia

"The Anderson shelter was designed in 1938 by William Paterson and Oscar Carl (Karl) Kerrison in response to a request from the Home Office. It was named after Sir John Anderson, then Lord Privy Seal with special responsibility for preparing air-raid precautions immediately prior to the outbreak of World War II, and it was he who then initiated the development of the shelter. After evaluation by Dr David Anderson, Bertram Lawrence Hurst, and Sir Henry Jupp, of the Institution of Civil Engineers, the design was released for production.
Anderson shelters were designed to accommodate up to six people. The main principle of protection was based on curved and straight galvanised corrugated steel panels. Six curved panels were bolted together at the top, so forming the main body of the shelter, three straight sheets on either side, and two more straight panels were fixed to each end, one containing the door—a total of fourteen panels. A small drainage sump was often incorporated in the floor to collect rainwater seeping into the shelter. The shelters were 6 ft (1.8 m) high, 4 ft 6 in (1.4 m) wide, and 6 ft 6 in (2 m) long. They were buried 4 ft (1.2 m) deep in the soil and then covered with a minimum of 15 in (0.4 m) of soil above the roof. The earth banks could be planted with vegetables and flowers, that at times could be quite an appealing sight and in this way would become the subject of competitions of the best-planted shelter among householders in the neighbourhood. The internal fitting out of the shelter was left to the owner and so there were wide variations in comfort.
Anderson shelters were issued free to all householders who earned less than £250 a year, and those with a higher income were charged £7. 1.5 million shelters of this type were distributed from February 1939 to the outbreak of war. During the war a further 2.1 million were erected.
The Anderson shelters performed well under blast and ground shock, because they had good connectivity and ductility, which meant that they could absorb a great deal of energy through plastic deformation without falling apart (This was in marked contrast to other trench shelters which used concrete for the sides and roof, which were inherently unstable when disturbed by the effects of an explosion - if the roof slab lifted, the walls fell in under the static earth pressure; if the walls were pushed in, the roof would be unsupported at one edge and would fall). However, when the pattern of all night alerts became established, it was realised that in winter Anderson shelters were cold damp holes in the ground and often flooded in wet weather, and so their occupancy factor would be poor. This led to the development of the indoor Morrison shelter
At the end of the war in Europe, households who had received an Anderson shelter were expected to remove their shelters and local authorities began the task of reclaiming the corrugated iron. Householders who wished to keep their Anderson shelter (or more likely the valuable metal) could pay a nominal fee.
Because of the large number made and their robustness, many Anderson shelters still survive. Many were dug up after the war and converted into storage sheds for use in gardens and allotments."

It looks as though Fred and May's Anderson Shelter was certainly up to scratch!