I was looking at the website you have so kindly created in memory of my brother, Ralph Skelton Woolass, when I noticed that it had been extended and updated with some family details since I printed it out some years ago (and I was intrigued to note that someone else was researching my family history in 2008!).  I therefore list below some details which you were asking for:
Stanley Woolass               b 28/09/1892    d 10/12/1957
Married 07/03/1916
Jessie Gertrude Wolass    b 11/10/1894    d 07/11/1983
Ralph Skelton Woolass      b 23/09/1917    d 16/04/1942
Peter Woolass                   b 10/08/1920
Stanley David Woolass      b 04/07/1930
I have also attached brief details of Ralph's RAF service history, gleaned from various sources as listed, in case some of it may be of interest.
Finally, may I thank you on behalf of my family for the trouble you have taken to set up this wonderful memorial to Ralph, which is very much appreciated.
Should you require any further information, please let me know. With best wishes,"
I replied to Ralph's brother and thanked him for his time and trouble in supplying me with this information on Ralph's all too brief career in the RAF. Another message followed with further information on Ralph with included a photograph of Ralph in his RAF uniform.

" It occurred to me afterwards that you might be able to use a photograph of Ralph. I have therefore attached a JPEG, which I have left as originally scanned so that you can resize it as required. The photograph was taken professionally in Salisbury, presumably when he was posted to Ibsley in late 1941. By some strange coincidence, I also spent most of my time at Ibsley when I was doing my National Service with the RAF some 8 years later, much to my Mother's distress.

My brother Peter joined the Territorial Army and was mobilised just before the war. He spent some time in the desert with the 8th Army, then in Italy, before finishing up as an Officer with the BAOR in Germany.

I'm sorry that I omitted to thank you also for the excellent memorial to Percy Charles Pickard, who was Ralph's cousin as noted. These two websites alone must have involved a lot of work and time - thank you so much for all your trouble. Please also thank your friend who took the photograph of Ralph's memorial in South Anston." 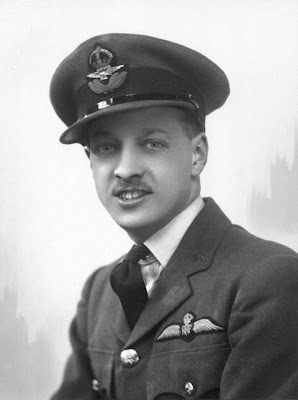