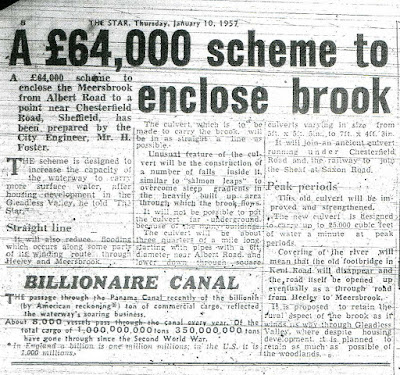 Wkipedia gives a brief description of the significance of the Brook
"The Meers Brook is a stream in Sheffield, England and one of the main tributaries of the River Sheaf. The
Meers Brook originates in Gleadless and flows downhill through Gleadless Valley and Meersbrook then,
tunnelled, continues underneath Meersbrook to pour into the River Sheaf near Saxon Road and Clyde Road in Lowfield.

But there is far greater detail on this excellent blog that details the Brook's history in particular and Sheffield's heritage in general. So much so that I have decided to abort any further research into its fascinating history