A reader of the site and blog has sent me a newspaper cutting of an inquest that was held into the death of an eight week old baby Mary Ann Cater on 11th December 1900. 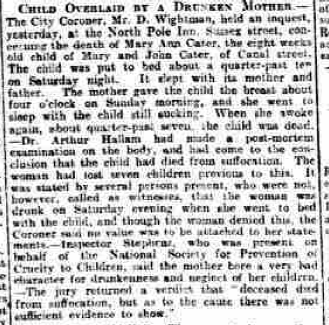 The City Coroner, Mr. D. Wightman, held an inquest, yesterday, at the North Pole Inn, Sussex Street, concerning the death of Mary Ann Cater, the eight weeks old child of Mary and John Cater, of Canal Street.
The child was put to bed about a quarter-past ten on Saturday night. It slept with its mother and father. The
mother gave the child the breast about four o’clock on Sunday morning, and she went to sleep with the child
still sucking. When she awoke again, about quarter-past seven, the child was dead.

Dr. Arthur Hallam had made a post- mortem examination on the body, and had come to the conclusion that the child had died from suffocation. The woman had lost seven children previous to this. It was stated by several persons present, who were not, however, called as witnesses, that the woman was drunk on Saturday evening when she went to bed with the child, and though the woman denied this, the Coroner said no value was to be attached to her statement.

Inspector Stephens, who was present on behalf of the National Society for the Prevention of Cruelty to Children, said the mother bore a very bad character for drunkenness and neglect of her children.

The jury returned a verdict that “deceased died from suffocation, but as to the cause there was not sufficient
evidence to show”.

I have dome some research on the Cater family, and it really is at times a tragic tale. I intend to post an article to the site at sometime in the future but at the moment I am trying to find a contemporary photo/illustration of Canal Street, Sheffield circa 1900. The house they lived in was a "court house" or back to back with just two rooms.which was in all likelihood a dingy, squalid hovel.