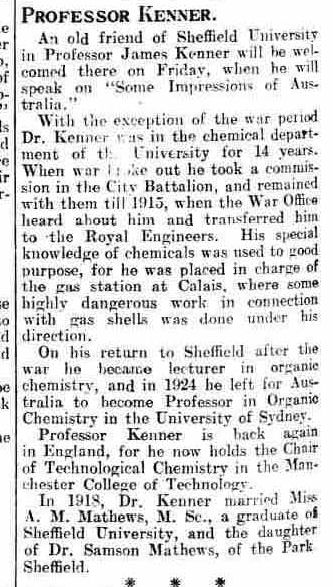 James seemed to be an interesting subject for an article on the site especially when I came across this article from the North Devon Journal dated 10th July 1924. The Kenner family had strong West Country links

The Sheffield Daily Independent report seems to have been rather furtive about his war service. James it appears was solely in charge and responsible for conducting chemical warfare on the Western Front by using phosgene (chlorine) gas.

Unfortunately when I began to do more research on James, I came across this article by Lord Todd in The Biographical Memoirs of Members of the Royal Society November 1975 (vol 21). Given the comprehensive nature of the article, I took my research no further.

It is also interesting to note that until I was contacted, I had no idea that a Sheffield chemist was so closely involved in such a terrible activity.