I received this information earlier this week which related to an article I placed on the site many years ago
"We were unaware of this tragic story. My husband  and I visited the National Memorial Arboretum a few years ago. Whilst visiting the 'Shot at Dawn memorial we noticed a plaque with a familiar surname- Ainley. We looked through my late father-in-laws family tree paperwork when we got home and discovered that this was indeed a relative. We have since returned to lay flowers by the memorial." 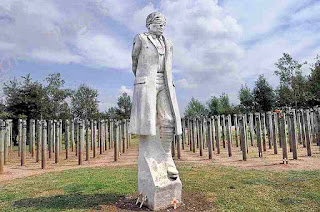 I also received a few weeks earlier this information that relates to George and his family
"Another addendum to this is the sad case of Arthur Loversidge a newspaper article dated 19 Oct 1910 in the Sheffield Evening Telegraph titled "Sheffield Tragedy Ivory fluter killed on the railway". Arthur was the brother of Alice Mary Ainley nee Loversidge 1875-1922"
Arthur Loversidge was George's uncle and the brother of George's mother Alice Mary
Unfortunately I have been unable to access the newspaper report that relates to the accident. The Sheffield Local Studies Library hase been closed since March this year and it is anyone's guess when it will re-open
Posted by ceegee at 3:53:00 pm