The Hendersons Were There After All


"Found your site via google and was intrigued to read your article on John and Agnes Henderson at which I thoroughly enjoyed.

You mention that the history of John Henderson was detailed in 'King Pole' (not familiar to me) and I wondered if you had any information on his ancestry or place of birth. I am descended from a line of Hendersons from Dumfries in Scotland and would be interested in trying to trace John Hendersons ancestry if it is not already known".

Basically the article is based on the Beatles (John Lennon) song "For the Benefit of Mr Kite" which appears on the Sgt Pepper album. Pablo Fanques Fair did appear in Sheffield in 1848 but Mr Kite and the Hendersons did not. 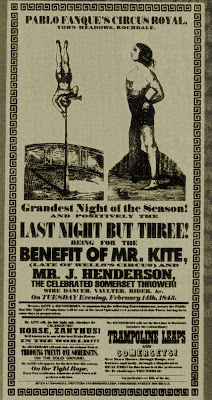 Anyway I decided to check the UK censuses to see if I could help the correspondent out but found out that John Henderson was born in Lambeth London and not Scotland. The ODNB gives the following information


"Henderson, John (1822–1867), circus performer and proprietor, was born in London, the son of John Henderson, an actor. He was advertised as a rider with Price and Powell's circus at Bristol in 1842. After a spell with Pablo Fanque in Lancashire, he was with Powell's circus at Hammersmith in 1843, performing as a trampolinist, clown, vaulter, and somersault thrower. He married Agnes Selina (c.1825–1879), the fifth daughter of Henry Michael Hengler, the circus rope-dancer, on 2 October 1843, at Canterbury. Their only child, a daughter, died at the age of twenty-one. In 1844 Charles Hengler (Mrs Henderson's brother) took over Powell's company; Henderson and William Powell were joint ringmasters in 1845. Henderson appeared as a leaper at Astley's Amphitheatre, London, in 1847, in William Batty's time, and returned in 1850 to perform on the iron wire. He continued with Hengler's company for many years, a brilliant all-round artiste, although he occasionally appeared in other arenas.

In October 1858 Henderson left Hengler to fulfil engagements in Moscow and St Petersburg, first selling his black mare Bess. By 1859 he had become involved in circus management, probably for Hengler, ostensibly of Frowde's Cirque Modele, at Sheffield, while at the same time appearing on the slack wire. The company was then transformed into Henderson's Grand Cirque, at Chester. Although he was always associated with Hengler, Henderson always strove towards success in his own right. During 1860 his circus toured England. For the next seven years he alternated between Hengler's, other circuses, and his own temporary companies. He was manager of the Christmas circus at the Agricultural Hall, Islington, London, for three seasons from 1863 to 1864, and ran the winter 1866–7 circus at the London Music Hall, Manchester. Henderson died of pleurisy on 10 May 1867 while his circus was at Ipswich, and was buried on 13 May in Ipswich cemetery. He was a fine tall man with curly hair and a bushy moustache.
John M. Turner
Sources
J. M. Turner, ‘The excitement and romance of circus history’, King Pole, 71 (June 1986), 4ff. · T. McDonald Rendle, Swings and roundabouts (1919) · G. Van Hare, Fifty years of a showman's life, or, The life and travels of Van Hare, new edn (1893) · Boase, Mod. Eng. biog. · The Era (19 May 1867) · Suffolk Mercury (11 May 1867) · Suffolk Mercury (18 May 1867) · m. cert.
But whilst researching this information I came across the following entry from the 1861 Census
"From the 1861 UK Census
Name Agnes Henderson Age 33 Estimated Year of Birth 1828 Relationship to Head of Household Lodger Occupation ...artist Address Sidney Street District Sheffield, South Sheffield Parish Sheffield Administrative County Yorkshire (West Riding) Birth Place Canterbury Birth County Kent

The Hendersons were of course "immortalised" in the Beatles (John Lennon) song "For the Benefit of Mr KIte" which appears on the Sgt Pepper album. Sadly their daughter died at the age of 21 and is buried with her father John in London's Highgate Cemetery. His body was exhumed from Ipswich Cemetery where he was first laid to rest in May 1867. His wife Agnes died on 10th October 1879, in Liverpool. She was buried in Toxteth Cemetery, Smithdown Road, with no surviving children 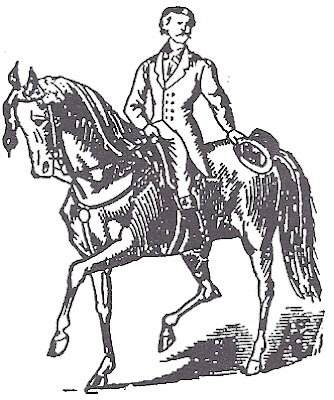