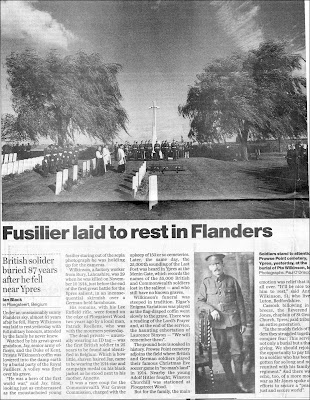 Private Harry Wilkinson of the 2/Lancashire Fusiliers. body was found in 2000, and he was reburied in 2001 with full honours.- the above cutting is from The Daily Telegraph


A cross commemorating Harry Wilkinson stands by the side of the road near to where his remains were found, 86 years after he died. This cross is not too far from Prowse Point Cemetery, and is located south of the St. Yvon craters. Private Harry Wilkinson was killed in action on the 10th of November 1914, and there is a faded picture of him next to the cross.
In the field behind this cross, the remains of three more British soldiers were found in March 2006. An identity disc was found with one, and he has been "identified" by the press as Private Richard Lancaster who, like Harry Wilkinson, served with the 2nd Lancashire Fusiliers and also died on the 10th of November 1914. Private Richard Lancaster was re-interred at Prowse Point Commonwealth War Graves Cemetery on  Wednesday 4 July 2007. 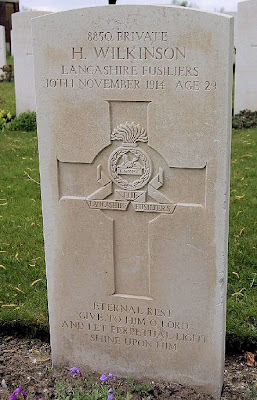 Harry's Grave at Prowse Point Cemetery with its memorial stone
Posted by ceegee at 12:45:00 pm