Morgan Stanley and the Great Britons of 2007

I just came across this from The Daily Telegraph - October 2007. Needless to say a wry smile crossed my face
"Britishness and the state of the union dominate the political agenda. But which Britons make our country truly great? Here Telegraph writers choose their favourites from this year across seven categories as the search begins for the Morgan Stanley Great Britons of 2007
·         Morgan Stanley Great Briton of 2007: Who gets your vote?
·         Great Britons of 2007: Telegraph writers' picks
BUSINESS
Our candidates in the business category have successfully flown the flag for Britain in the global economy, from banking to retailing and engineering to telecoms.
Sir Fred Goodwin is the leading British banker of his generation, having transformed Royal Bank of Scotland from a mid-sized provincial player into the world's fifth largest bank.
Seven years ago, he steered the bank through a successful £21billion hostile takeover of NatWest, a bank three times its size.
This year he surpassed that as Royal Bank led a consortium of Belgium's Fortis and Spain's Santander, beating competition from Barclays to buy Dutch bank ABN Amro for £49billion in the largest takeover in banking history." 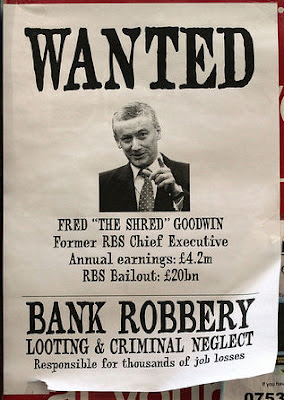 How the feckless have fallen!