"It is the end of an era for Sheffield's main police station, which opens its doors for the final time on Friday.
West Bar police station opened on 16 July in 1965 under the City of Sheffield Police Force.

Now the crumbling building, which once towered over the city's skyline and served the force for over 45 years, is closing for a new state-of-the-art building.

Chief Superintendant Andy Barr told BBC Sheffield: "It's a day of sadness, a lot of the cops have loved working there over the years. There are some fond memories and some great stories."

The five-storey building has been sold to a development company which plan to demolish the former headquarters to make room for a new hotel and restaurant establishment.

"Instead of housing prisoners it will be housing some of Sheffield's many visitors."

Mr Barr added: "We're closing it because it's past its sell by date.
"The boiler and lifts kept breaking down. It's very cold and officers need somewhere better to work. We've also had a rat infestation problem too.

"We accessed the costs and they really would be too much for the police to continue working there and update the building."

Officers and staff will be relocated over the weekend to the new headquarters at Snig Hill. The police will remain to operate a 24-hour public enquiry desk which was available at West Bar". 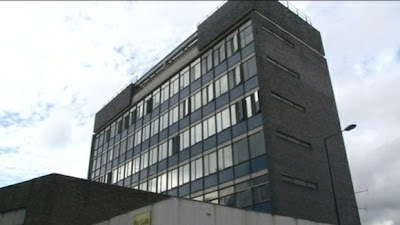 Bearing in mind that the building is "crumbling" (a common condition that afflicts many public buildings that were built in the 1960's) and that it was "passed it sell-by date", I was not surprised to see that the building was to be demolished and be replaced by a new hotel on the site.

But I was taken aback when it was reported last week that this crumbling obsolete building was NOT going to be demolished but was going to be converted into a 142 bed city centre hotel.