I came across this cutting from The Telegraph and Independent dated 12th June 1939 which refers to Nellie as "Sheffield's leading girl rider". Nellie was my gran Rose's niece but until I read this article I had no idea that she was a prominent cyclist in the city 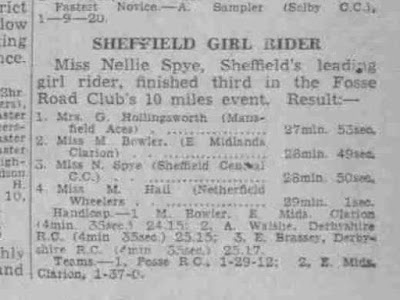 Nellie was born in Sheffield in December 1918 and was the daughter of Francis Arthur and Ada Sye. Her school record is on the Sheffield Indexers site
Spye, Nellie (Student, dob 12 Dec 1918). Parent or guardian name(s): Archie (~), of 9 HighHouse Terr.
Admitted to Langsett Road Girls School, Hillsborough, as of 22 Aug 1927, until 17 Oct 1930, reason for leaving: Left District. Previously attended Junior Dept.

Nellie married a man called BILL GOW and at one time lived at 47 Crowder Avenue, Southey Green, Sheffield.
Posted by ceegee at 4:04:00 pm