I came across this newspaper report the other week. It is from Lloyds Weekly News - London edition and is dated 19th January 1890. It concerns my great great grandfathers business Thomas Hobbs & Co who were based in North Wharf Road Padding ton London. They were "contractors to the council". I should add that the term "dust" used in this article is an euphemism for another four letter word ending in "t" 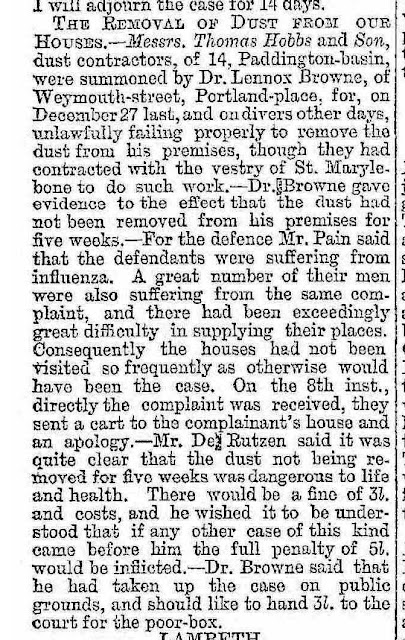 Dr Lennox Browne was clearly vexed that "dust" had not been collected from his premises for over 5 weeks. I am unsure how many people lived in the house but if it included servants it could be quite a few. And as we all know "dust" piles up. Thomas Hobbs' mitigation was that he and a "great number of his men" were suffering from influenza" and there was " great difficulty in supplying their places". Whilst influenza can be a debilitatating condition I think that is highly unlikely that the men would have been laid up for over five weeks. And I'm sure that as there was no social insurance, the men would want to return to work as soon as they could. And whilst I can imagine that collecting "dust" is not the most sought after occupation I am sure that they could have found some persons who would have undertaken the task.

But at least Dr Lennox Browne had some luck - it was the middle of winter and not the height of summer. It could have been a lot worse!