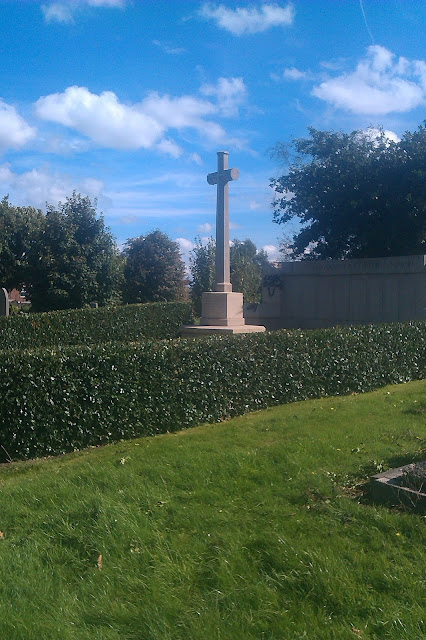 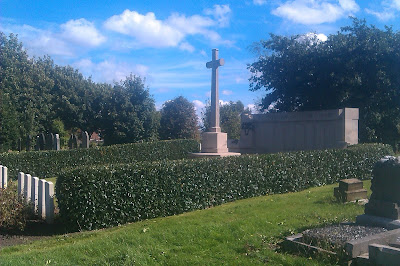 As I walked around the Burngreave Cemetery last Sunday, my eye was drawn to the War Memorial that stands on a mound towards the Scott Road Entrance.

For those that are not familiar with the Memorial, this is what the Commonwealth War Graves Commission state

"During the First World War there were two substantial war hospitals in Sheffield, the Wharncliffe, in the Wadsley Asylum, and the 3rd Northern General, housed in 15 separate buildings. The city, a centre for war industry during the Second World War, suffered heavy enemy air-raids during the Blitz with 600 people killed in a single raid in December 1940.

Sheffield (Burngreave) Cemetery contains scattered war graves of both wars. Behind the Cross of Sacrifice in plot JJ is a Screen Wall commemorating those First World War casualties whose graves could not be marked by headstones, most of them buried in the plot of ground immediately in front of it. In front of the Screen Wall are a number of Special Memorial headstones for Second World War casualties buried elsewhere in the cemetery whose graves could not be marked".

In all, the cemetery contains 235 Commonwealth burials of the First World War and 57 from the Second."

And so what has happened - some idiot(s) have put their tags in black aerosol paint on the memorial. It is on the side of the plinth and is nothing short of desecration. They should be ashamed of themselves but somehow I think that is unlikely. You do despair at times.
Posted by ceegee at 7:54:00 pm