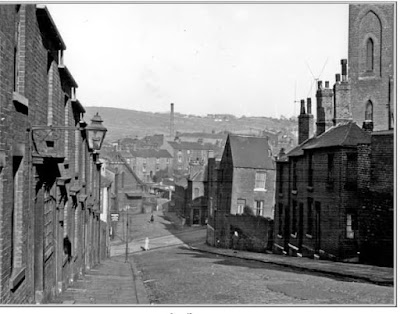 They also provided me with the following information

" It’s a photograph taken from Pitsmoor Road looking down Haywood Road . On the right is the old chapel that ran from Pitsmoor Road down to Fowler Street . We lived on Pitsmoor Road towards Pitsmoor Church . We entered on Pitsmoor Road and down a set of stairs out of another door down into a yard down some more steps onto Fowler Street. Called cellar kitchen house.
Looking down on the left side of the photo about half way down .  Behind these houses was Grove Street and further on Marshall Street. The pub at the bottom was the Fowler Hotel on Fowler Street. It’s about where the new road is just before it goes round the corner.    Round the corner down the Street from the pub was my mums house about 20 yards down a left turn up to Grove Street. The first house on the right was where Patricia died . Just higher up on the other side left was another bomb site taking perhaps four or five houses. In the distance on the photo is Woodside Lane and the chimney was a firm on Wood Fold"

The reference to Patricia relates to a girl who died on the night of the Sheffield Blitz. Patricia Lee was a three year girl who was sheltering from the bombing with her grandparents in the cellar of 70 Grove Street. No-one survived. I have updated the article with the details