Information on Henry is scarce but the CWGC records show that he was the son of John Charles and Ellen Hughes.
I was researching the 1911 Census and found this entry


and then there was this entry five years later

Superficially this could be Henry's family but to be certain I would need further information to verify them. I could send of for the certificates and this would undoubtedly help. But they cost £9.25 each at the moment which is prohibitive to say the least. 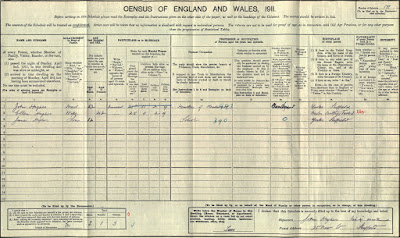 Nevertheless three points on the census stand-out - firstly John was unable to read and write - he just placed his mark on the form and someone else must have completed it for him Secondly the family were living in just two rooms and finally their son James was living with them. There was another child that was still living (was this Henry who would have been 20 at the time of the census?) but was not resident at 25 New Street. John and Ellen had eleven children but only two were still living in 1911.

If Henry was the other son it means that the British Army executed one of their only two surviving children. You are left literally speechless!