The following cutting is from the Sheffield Telegraph dated Thursday 17th March 2016 and concerns the composer and musician William Sterndale Bennett (1816-1875). 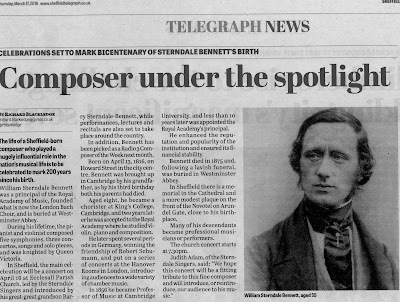 It was the bi-centennial anniversary of his birth and a series of events were to be held throughout the year to commemorate the event.

But what the article fails to mention is that William Sterndale Bennett is the only person from Sheffield to be buried in Westminster Abbey  I am unsure of the criteria that are adopted that permit a person to be buried in the Abbey, but a recent publication stated that over three thousand people are buried within the Abbey's precincts. For William to be Sheffield's only burial at the Abbey is rather perplexing given the City's prominence in the late nineteenth and twentieth century
Posted by ceegee at 5:48:00 pm