The attached is from The Manchester Guardian dated 7th September 1922 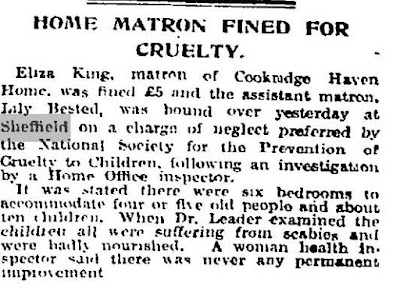 Superficially it is a case of "nothing ever changes," Nearly one hundred years later, people are still being neglected and abused in adult and children's care homes despite the strict regulatory regimes they operate under, and the governments rigorous inspection schedules(mmm!)

But in this case it appears that four or five old people were accommodated as well as about ten children in this one home in just six bedrooms. The report gives the impression that they did not know how many people were in the home at the time of the Home Office inspection. But what is astounding is that all the children were infested and suffering from malnutrition and the health inspector inferred that "there had never been any permanent improvement."

In other words neglect was the norm. And Eliza King who was matron of Cookridge Haven Home was fined £5 (about £200 in today's money) for running this hovel in a cruel and malicious way. It is almost as if the authorities condoned this state of affairs