This is the first post to the blog I have done in over six months. There are a number of reasons for this tardy behaviour but the main one is that I would rather sit outside in the summer sunshine reading a good book, than sitting inside posting content to the blog and site.

Nevertheless, material has surfaced over the period, a lot of which deserves publication

The first is from The Manchester Guardian dated 25th February 1935 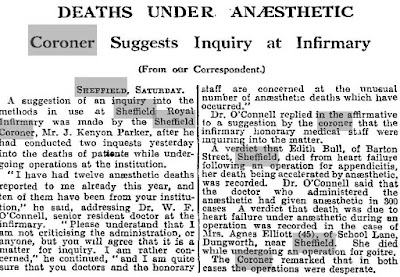 Bearing in mind that this was the last week in February, the Coroner remarked that he had already officiated in 12 inquests this year where the victim was under anaesthetic at the time of their death. And that 10 of those deaths occurred at the Sheffield Royal Infirmary. He stated that he was "concerned" at the "unusual number of anaesthetic deaths" that had resulted and suggested an inquiry into the methods used.

I would have expected that any sudden death under anaesthetic would have been investigated by the hospital but it is inferred in the report the this was not the case. In fact you get the impression that if the matter had not been raised by the Coroner, no action would have been taken.