I came across this old newspaper cutting which sadly has no date. It was before 2008 because that is when the journalist Gail Robinson who wrote the item received her compulsory redundancy notice from Johnston Press in 2008. It appears that the local press barons decided to close the regional offices of the Sheffield Star in a cost-cutting exercise

The cutting relates to funerals at South Elmsall's St Mary's Parish Church and one in particular which led to a one legged woman being coerced into being a pallbearer at the funeral ceremony. 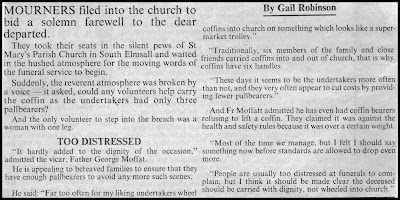 "It hardly added to the dignity of the occasion" was a bit of an understatement by the vicar Father George Moffat. What is more disconcerting is that the one-legged woman was the only volunteer. If she had not taken a corner of the coffin, I dread to think what would have happened next.
Posted by ceegee at 4:00:00 pm