"City Road Crematorium opened on 5 April 1905 by the Lord Mayor, Joseph Jones and was the tenth crematorium to be built in the UK. The first cremation took place on 24 April 1905 and to date over 195,000 cremations have been carried out."

But in the Manchester Guardian the following day, this report appeared 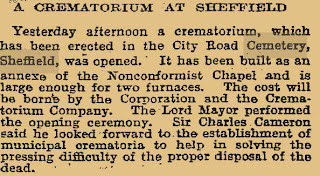 If you read the article you would assume that Sir Charles Cameron was the Lord Mayor but he wasn't according to the Council. But neither was Joseph Jones. the Lord Mayor of Sheffield in April 1905.


The Lord Mayor who performed the ceremony was in fact Sir Joseph Jonas who was, during his business career, a major industrialist in the city and a generous benefactor to many causes. However his career and indeed his life ended in controversy that still leaves a nasty taste in the mouth today.

And just for trivia's sake, the following paragraph iss taken from the Cremation Society's webpage and refers to the UK's first official cremation. Sir Charles cameron appears to have been a leading proponent of cremation hence his speech at the opening ceremony

"Meanwhile, on 26th March, 1885 the first official cremation at Woking took place. Mrs. Pickersgill, a well-known figure in literary and scientific circles, was the first of three cremations that year. Mr. Charles William Carpenter was cremated on 19th October and in December the third cremation, even though the body of a fourteen stone woman, was again successfully performed in only 11/2 hours. In 1886 ten bodies were cremated."
Posted by ceegee at 10:54:00 am