84 Years in the same house 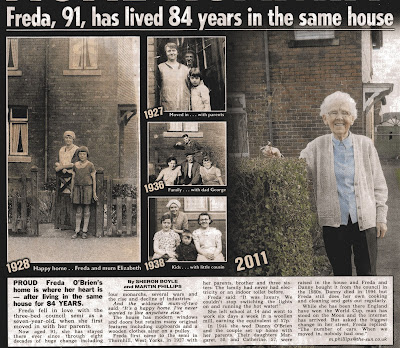 
I'm not an avid reader of The Sun but my son does read it despite my warnings about what may befall him if he believes half the tripe that they publish. Anyway like it or not The Sun is the UK's biggest selling daily newspaper which speaks volumes for the newspaper industry in particular, and British society as a whole.
But once in awhile, they publish a report that I find fascinating and thought provoking. And Freda O'Briens life in Thornhill, West Yorkshire is certainly that!
The text is as follows
"PROUD Freda O'Brien's home is where her heart is - after living in the same house for 84 YEARS.

Freda fell in love with the three-bed council semi as a seven-year-old, when she first
moved in with her parents.Now aged 91, she has stayed there ever since through eight decades of huge change including four monarchs, several wars and the rise and decline of industries.

And the widowed mum-of-two said: "It's a happy home. I've never wanted to live anywhere else."

The house has modern windows and doors but retains many original features including cupboards and a wooden clothes airer on a pulley. Freda first came to the semi in Thornhill, West Yorks, in 1927 with her parents, brother and three sisters

The family had never had electricity or an indoor toilet before.Freda said: "It was luxury. We couldn't stop switching the lights on and running the hot water!" She left school at 14 and went to work six days a week in a woollen mill, earning the equivalent of 57p.

In 1944 she wed Danny O'Brien and the couple set up home with her parents. Their daughters Margaret, 58, and Catherine, 57, were raised in the house and Freda  and Danny bought it from the council in the 1980s. Danny died in 1994 but Freda still does her own cooking and cleaning and gets out regularly.

While she has been there England have won the World Cup, man has stood on the Moon and the internet has arrived. But asked the biggest change in her street, Freda replied: "The number of cars. When
we moved in, nobody had one."
Posted by ceegee at 9:13:00 am