Too Much Sun is Bad For You

At these times of national crisis, when the Coalition government is doing all that it can to promote the security and prosperity of its people, it comes as a bit of a surprise to find out that this is not the first time a  Coalition has grappled with the vagaries of "the dismal science". I came across the following poster for the Conservative party in 1929 which pointed towards a new world for those who had suffered so much in the Great War and the ensuing depression of the 1920's 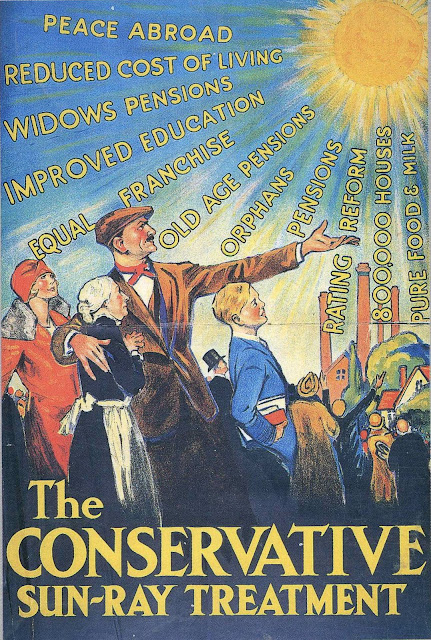 Of course these ideals, principles and policices that were proudly announced by the Conservative Party proved to be just that, announcements. In fact, the Conservative led Coalition or "National" governments of the 1930's did just about the opposite of what they announced in 1929. War. The 'Giant Evils' of Want, Disease, Ignorance, Squalor and Idleness which William Bevridge alluded to in 1942 report enjoyed full reign in the 1930's, evils which the national government of the time positively encouraged with its narrow and insular outlook. Their justification for the policies they pursued was that there was no alternative after the financial crash of 1929.
The current coalition are also making a series of announcements similar to those uttered in 1929 but their policies and principles are more or less in line with those of the National governemts of the 1930's - I wonder if history will repeat itself. mm...
Posted by ceegee at 9:34:00 am