Many years ago I visited the grave of one of the few writers that I would call a "literary hero" - George Orwell (Eric Blair). The grave is situated in the churchyard of All Saints Church in Sutton Courtenay in Berkshire. Photos were taken and then promptly lost by Tripleprint which meant that I did not have no photographic record of the visit. And since then the other point that has troubled me is why George was buried in Sutton Courtenay as he had, as far as I knew, no significant connection with the village.

However due to Wikipedia I now have both a photo of the grave. I should add that when I visited the grave I was rather dismayed about its general condition and neglect - the rose bush then was a rather a poor specimen to say the least! 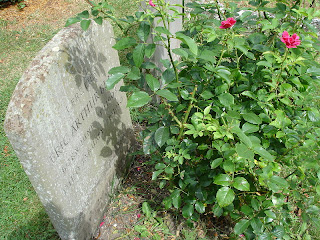 His memorial bears the simple epitaph: "Here lies Eric Arthur Blair, born 25 June 1903, died 21 January 1950
AND I also ascertained from the same article why George was buried in Sutton Courtenay in the first place.
"The churchyard is notable as the location of the burial place of Eric Arthur Blair, better known by his pen name, George Orwell. As a child he fished in a local stream. He wanted to be buried in the churchyard of whichever was the nearest church to where he died. However he died in London and none of the local churches had any space in their graveyards. Thinking that he might have to be cremated against his wishes, his widow asked her friends whether they knew of a church that had space for him. David Astor, a friend of Orwell's who lived in Sutton Courtenay, explained the problem to his local vicar, and arrangements were made".
I have also found George in the 1911 Census as a 7 year old schoolboy 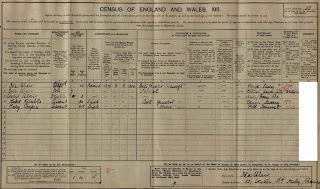