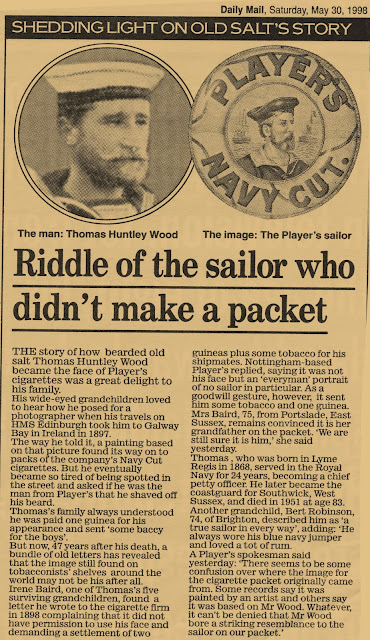 It appears that there is quite a lively correspondence in The Guardian's Notes and Queries column with regard to the face of Players Navy Cut.

WHEN the Robinson children watched their grandfather light his pipe, they did not realise they were gazing at one of the tobacco world's most famous faces.
But as they grew older, the five youngsters began to look at his portrait on packets of John Player's cigarettes as that of a family member. And 50 years after Thomas Huntley Wood died in Portslade, Bert, Ron, Bill, Les and Rene still fondly remember the face that was familiar around the world. Born in Lyme Regis in 1868, Thomas was in the Royal Navy for 24 years, latterly as a chief petty officer, before becoming a Southwick coastguard. It was while serving on HMS Edinburgh in Galway Bay that he was offered two guineas and some tobacco to be photographed as the Player's mascot. Since then, the nameless portrait based on his photo has become an institution among smokers worldwide. Thomas's family history came to light after Argus antiques expert George Greenway appealed for information about the mysterious Player's sailor. His identity was revealed in a letter from Vera Robinson, the wife of one of Thomas's grandsons, Bert. now 74 and living at West Hill Place, Brighton, used to smoke Player's himself. And he was the only one of Thomas's grandchildren to follow in his seafaring footsteps. He says: "My father was in the Navy, serving on HMS Hercules in the Baltic in World War One, and he always smoked, so we were used to our grandfather's image being used on cigarette packets. "All my brothers were in the Army but I was in the Navy." Younger brother Bill, 71, of St Leonards Avenue, Hove, says Thomas never spoke of his claim to fame. And though his face graced cigarette packets the world over, he always preferred a pipe. Bill says: "I remember him as a nice old chap who used to collect pipes." Younger brother Ron, 65, of Trafalgar Road, Portslade, recalls that even in retirement, Thomas was unmistakable as an old sea dog. He says: "He used to wear a peaked cap but he only had a moustache when I remember him, not the beard." Thomas died in Portslade in 1951, aged 83, leaving six sons, five daughters, 18 grandchildren and 16 great grandchildren. He is buried in Portslade Cemetery alongside his wife Rebecca and one of his sons who also became a sailor, Petty Officer William Wood. Granddaughter Rene Baird, 65, of Shelldale Crescent, Portslade, still visits Thomas's grave while going to and from a senior citizens' club at Portslade Town Hall."
Posted by ceegee at 9:14:00 am