Long Shadows Over Sheffield - Forgotten Voices of the Great War 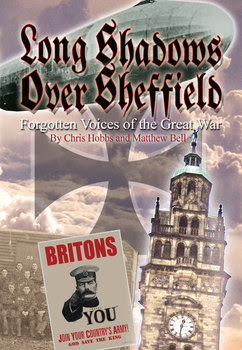 Long Shadows Over Sheffield - Forgotten Voices of the Great War

"The Great War had a devastating effect on Sheffield. Hundreds of the city’s young men were slaughtered on the first day of the disastrous Somme offensive. A shocking German Zeppelin raid dropped death from the skies above Sheffield in September 1916. Church Rolls of Honour and War Memorials still bear their names but their stories are largely forgotten, until now.

Long Shadows over Sheffield unearths some of the most jaw-dropping tales of the men who willingly gave up their civilian jobs to make the ultimate sacrifice for King and Country.
From the 67-year-old Sheffield resident who became one of the oldest men to die in the war, to the 15-year-old from Nether Edge whose fascination with the sea led to his death in battle.
The suffering didn’t end with the cessation of hostilities. Survivors – including three of the city’s holders of the Victoria Cross – relived the unspeakable carnage for the rest of their lives, whilst the grief of wives and parents is laid bare in previously unpublished correspondence.

Graphic newspaper reports are mixed with rare photographs and a Sheffield soldier’s personal war diary to provide a memorable tapestry of hardship, heartbreak and horror that was the result of the Great War which began a century ago."