I came across this article from the Daily Independent dated 27th August 1937 relating to a gala night that was held by Oak Street Methodists Club at Sheffield's Heeley Baths the previous night. 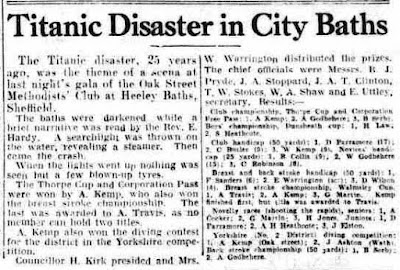 A couple of things do spring to mind. Firstly it seems as though this scene was enacted prior to the actual swimming and so I assume that the swimmers would have to make their way through the debris field of the Titanic when they were competing. But more importantly, the Oak Street Methodists Club seem to have trivialised one of the greatest losses of life in maritime history. According to the figures 1517 prople lost their lives when the Titanic sank but as far as I can ascertain there was hardly anyone with a "Sheffield connection.". And so why do it? I just cannot see the point of this rather half-baked spectacle.

There may have been some point if the Rev E. Hardy had at least said prayers for those that lost their lives but in the "darkened baths" he merely read a brief narrative that was succeeded by a "searchlight thrown on the water". Strange times!