I saw a friend of mine last week at Upperthorpe and he pointed out to me a piece of Sheffield's heritage that has been lost forever.

The Upperthorpe Hotel, like many thousands of other pubs in the country, shut its doors for the last time, quite a few years back. It remained boarded up and was then sold for conversion into private residential/commercial accommodation. 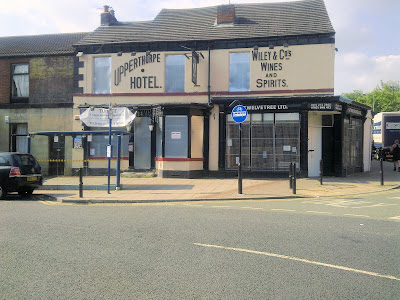 As you can see from the above photo which was taken inthe summer of 2011, the Hotel's frontage has a plaster sign advertising "Wiley & Co Wines and Spirits" and the name of the establishemnt "Upperthorpe Hotel". 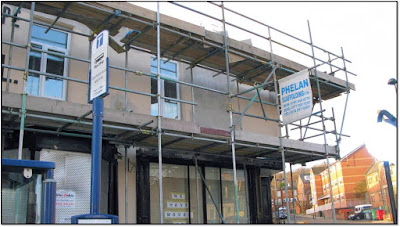 In December 2013 the new owners of the property instructed the building contractors to remove the signage "Wiley & Co Wines and Spirits" and "Hotel" and plaster over it. The only part left was "Upperhorpe" and this was painted over in a rather drab masonry paint. And so another very very small part of Sheffield's commercial heritage has been lost for good. No doubt the new owners had their reasons for the removal but personally I think they were mistaken.
Posted by ceegee at 3:18:00 pm