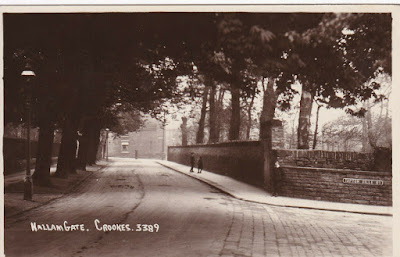 I have never seen this photograph before. It shows Hallamgate Road in Crookes, At the end of the road is the junction with Lydgate Lane and the building you can see in the middle of the photograph is the |Old Grindstone public house.

Broomhill Online have researched the history of the road


"In 1850 Hallamgate Road was a country lane connecting Hallamgate House, standing at the
junction with Crookes Road, with Hallamgate Farm, which stood back from the lane roughly
behind where number 28 Hallamgate Road now stands.

Hallamgate House was built for Francis Hoole and family and was occupied by him certainly
in 1790, if not earlier. The house stood out in its locality in terms of scale and had an
ornamental garden complete with ha-ha, which still exists today. Later occupants were:

At the other end of Hallamgate Road, Hallamgate Farm was the home of the Spooner family

and dated from 1760, so was older than Hallamgate House. The Spooner family had large
land holdings in and around Sheffield and in 1815 Joshua Spooner extended these by
acquiring all the fields between Lydgate Lane and Fulwood Road, purchasing them from the
estate of the Rev. Wilkinson of Broom Hall. The Glossop turnpike Rd (now Manchester Rd),
Lawson Rd, Sale Hill, Tapton Crescent Rd and Tapton House Rd were all built on land once
owned by the Spooners.

The end of Hallamgate Road that joins Lydgate Lane is pretty much the same today as it ever was,
which is why the road is narrow at that end. However moving towards the junction with
Tapton House Road, the route of the road remained undetermined until after Hallamgate
Farm was demolished at the turn of the 20th century. An early ‘indicative’ route that would
have produced a straighter road was abandoned and the change of plan left a curious
triangular remnant of land that was undeveloped until the 1930’s. The footprint of this
‘false start’ is clearly visible on the ground today.

The houses along Hallamgate Road were built at various times over the period 1890 to 1930
and one can follow the pattern of development through the OS maps. There are several fine
Edwardian houses in the road; the Pevsner Guide to Sheffield draws particular attention to
no.20 in ‘Domestic Revival’ style, built between 1901 and 1905. It was the home of Bernard
Hobson, eldest son of John Hobson, in 1912. Hallamgate Farm itself disappears from the OS
map at the same time as nos. 16, 20, 28. 30 and 32 appear for the first time, in the 1905 map."

Note ** the student halls of residence were in turn demolished in the winter of 2014 and the University of Sheffield sold the land to private developers. The site is now occupied by private flats and appartments