On the same page of the Sheffield Telegraph dated Friday 19th October 2007 that gave details of the future of Sheffield's Old Town Hall and Courthouse, there was also a smaller article on a building that I always called the Locarno but I guess that is just a sign of my age

The building started as the Lansdowne Picture Palace which was at the corner of London Road & Boston Street, Sheffield 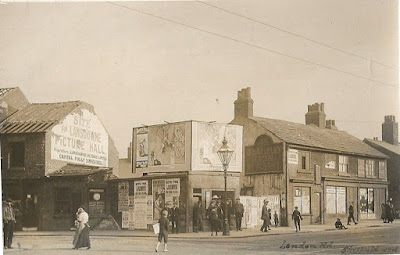 "The Lansdowne Picture Palace was designed by architect Walter Gerard Buck of Campo Lane, Sheffield. It stands at the junction of London Road and Boston Street and opened on 18th December 1914. Brick built, it had a marble terracotta facade in white and green with a Chinese pagoda style entrance with arched windows on the side elevation.

Seating was originally for around 1,250 but by 1940 was reduced to 965 due to cramped conditions. In the days of silent films it had a ‘Bijou Orchestra’ with seven players, later increased to twelve in the 1920’s. A two show a night policy was adopted with matinees on Mondays, Thursdays, Fridays and Saturdays.

Little seems to be documented about the syle of the auditorium. The Lansdowne Picture Palace closed abruptly following the air raids on 12th December 1940 although damage was said to be negligible. The final film shown was Carole Lombard in “Vigil Of The Night”.

In 1947 the cinema became a temporary store for Marks & Spencers. In the 1950’s it became a Mecca Dance Hall called the ‘Locarno’ later changing into ‘Tiffany’s Night Club’. It had several more incarnations as a night club with different names and the frontage was painted black, its last name being ‘The Bed’.

Recently, following three years of closure, the original white marble facade with bands of darker stone has been restored with stained glass windows inserted and the front of Lansdowne Picture Palace is now a Sainsbury’s ‘Local’ supermarket. The auditorium was demolished and a development of student accommodation has been built at the rear of the former cinema" 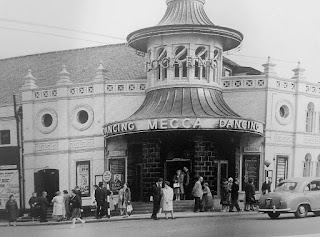 The following photo was taken after the night of the Sheffield Blitz and shows what was left of the Hermitage public house which was only about 50 yards away from the Lansdowne Picture Palace. the fact that the cinema was shut even though damage was said to be negligible is puzzling to say the least 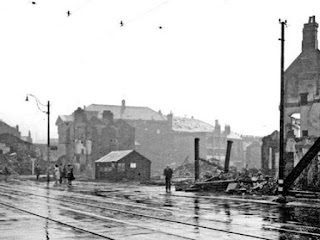 .
I am pleased that the frontage of the building has been restored as its "pagoda" style is rather unique in Sheffield but over 90% of the original building was demolished in order that the student development could proceed. I do not think the two structures compliment each other but that is just my opinion