I came across this case in the Evening Telegraph and Star dated 19th Novemeber 1897 . It concerns a Mary Riddal and her husband (not named) who were summoned and convicted for selling adulterated milk in the Park.

The adulteration was one of the worst the inspector had seen yet - in fact the samples taken were adulterated with 30% water. But the defendent explained that he had had bad luck with his cows and that he had to buy milk off other people. He had received assuarances that the milk was pure but it appears he did not check it or receive any guarantee to this effect. 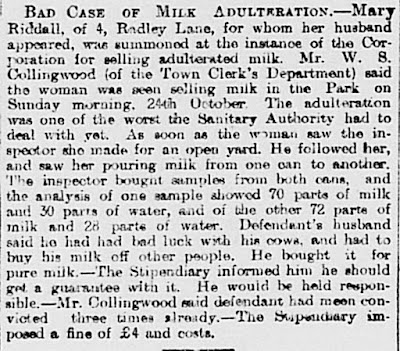 From the report it appears that the defendent has had a rotten run with his bad cows. This was the fourth time he had been convicted of this offence!
Posted by ceegee at 5:30:00 pm