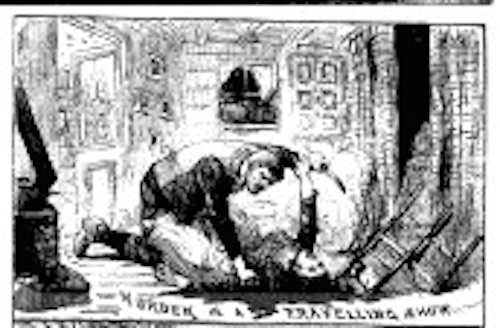 From Illustrated Police News, 31 August 1889
The follwing report appeared in the Times newspaper on Saturday 24th August 1889
"The Murder Near Sheffield: At Sheffield (West Riding) Court yesterday, Robert West, a travelling showman, was charged on remand with the murder of Emma West, his wife, at Woodhouse near , on Saturday morning, the 17th inst.
It will be remembered that while his wife was in bed in the caravan West cut her throat and then surrendered to the police, making a full confession. When deceased's mother was called an extraordinary scene occurred. Mrs. Sketchley called prisoner a murderer and villain, on which West said she was partly the cause of it, and that he was glad he had killed deceased, and only wished he had killed a man going by the name of "Leicester Jack" of whom he was jealous.
He only wanted to die now, and the sooner for better.  He was committed for trail on the capital charged and on leaving the dock called out, "Good-bye" to his friends in Court in a most careless manner".
This seemed to be an interesting case and as the murder occurred in the Woodhouse district of Sheffield I thought I would do some research.
However someone had already done this in July 2015 and as have no wish to replicate this excellent article I am just goung to post a link to "Murdered by a Travelling Showman"
And I would like to know more about "Leicester Jack" but I think the possibilty of that is next to zero
Posted by ceegee at 10:42:00 am