On the front page of the Sheffield Star & Telegraph was this small article featuring the views of Flight Lieutenant C E Reynolds, the Officer Commanding the North East area. He was responding to reports that recruitment to the R.A.F. had halved in recent weeks, and that the current figures were nearly the lowest in the last twelve months.

The Officer Commanding the North East area was not alarmed though and referred to a number of factors that caused the drop in recruitment such as paid holidays etc.

What Flight Lieutenant C E Reynolds did not know at the time is that this report appeared on the 11th July 1939 and in 7 weeks time the country would be at war with Germany. I wonder if he was alarmed then! 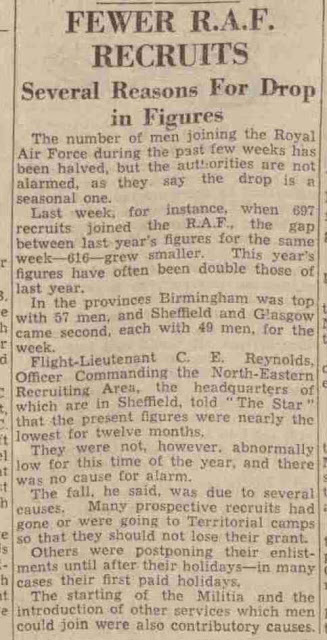