I've just posted another article to the site that seems a bit irrelevant at first glance. To me it is not. It concerns the sudden death of a former railway employee John Holland who collapsed in the "old mens hut" in Sheffield's Abbeyfield Park.(Pitsmoor) 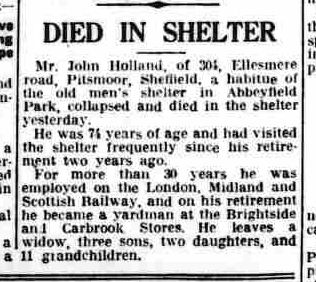 John was 71 at the time of his death but I am sure not a day went by when he did not think of his son Ernest and the fate that befell him.
Posted by ceegee at 5:38:00 pm