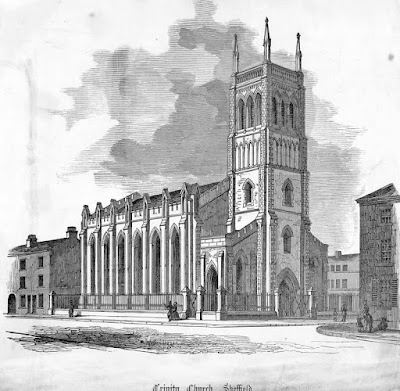 Last week I was contacted by a current member member of theChurch - it is now called The New Testament Church of God. I was asked if I could verify if there had been a graveyard and/or burials at the Church.

I replied that I'm afraid I had no knowledge of any graveyard being on the site. I thought that it would be highly unlikely for two reasons. One it's very close proximity to the river and two, the "disquiet" about the state and condition of city churchyards at that time. Having said that there may have been special dispensation given for a person or family closely associated to the church to be buried either in the church or within its precincts. Again I have no knowledge of this happening at Holy Trinity.


However afterwards I was rather puzzled and so I did some research and found out that there had been a graveyard at the site but only for a short time. A total of nine burials took place in July and November 1859. It appears that the graveyard at Holy Trinity was opened and then closed after 9 burials because it was decided to use the land for a school building. There is no indication to date to say whether or not the graves were relocated elsewhere. If not they will still be under the school building

The church is opposite the site of the former Laurel Works where eight people lost their lives on the night of the Sheffield Blitz on 12/13th December 1940
Posted by ceegee at 4:26:00 pm