Whilst I was researching the 29th victim (see previous blog) I came across this photograph that was published on 25th Sepember 1920, the fourth anniversary of the Zeppelin Raid on Sheffield. 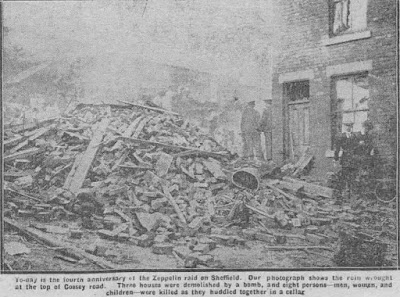 "Two high explosives bombs fell in Cossey Road causing dreadful loss of life. The first landed on a block of three terrace houses comprising No's 26, 28 and 30. In No 28 Alice and Albert Newton were killed as they lay in bed. Luckily, their infant son was spending the night with his grandmother in a nearby street and was unharmed. George and Eliza Harrison lived at No 26 with their two daughters and two grandchildren. After the warning had sounded they were joined by their neighbours from No 24, William and Sarah Southerington. George and William stayed in the living room while everyone else took shelter in the cellar. All eight were killed in the explosion. The Southeringtons' house suffered only minor damage and had they stayed at home would probably have survived. The second Cossey Road bomb landed on No 10 killing Levi and Beatrice Hames and their one year old son".