I've just posted an update to the article I wrote many years ago about the Zeppelin Raid on Sheffield in September 1916. Due to wartime restrictions and censorship the newspapers at the time only printed an outline of the attack and its aftermath. But after the cessation of hostilities in November 1918, a far fuller account emerged.

The account was published in the Sheffield Independent dated Tuesday 3rd December 1918. And at the end of the report it made a brief mention of a casuality of the raid. It gave me a lead on a matter that had puzzled me for quite a while. The raid claimed the lives of 28 civillians - 8 men 10 women and 10 children and these were named at the subsequent inquest. But on the memorial plaque at the Baltic Works it states that 29 civillians were killed 9 men 10 women and 10 children. Who was the missing man?

Two days later the paer carried this report which included the reason why the person concerned was missing from the initial total. 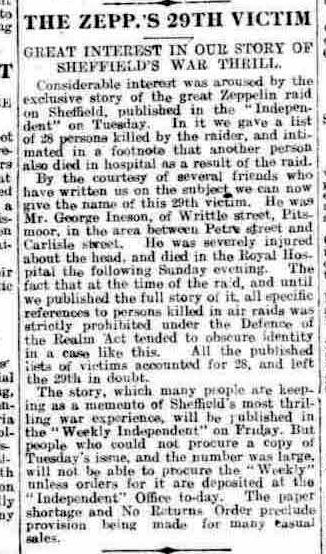 George was the last victim of an air-raid on Sheffield until the summer of 1940 when three persons lost their lives when the Luftwaffe dropped their first bombs on Sheffield.