This relates to the family of James Firth who was awarded the Victoria Cross in 1901 for his actions in the Boer War. He was the first person to be "born and bred" in Sheffield to receive the award. 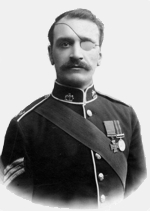 Alleyne Firth who is mentioned in the mail was James's surviving son.

This came from a reader of the linked article

"Just a side story somewhat irrelevant, but here it is...I was researching some puzzling postcards in my collection sent from German Silesia to Luton and Tetney which I found years ago in Gloucester on a stall.

It seems they were sent to a Miss Mary Eunice Haith [1902 - 2002]  who married Alan Haith Blow  [guess there was minor some degree of intermarriage there...] in 1935 who himself  had previously been married to Sylvia Dolby [d.1942] whose second marriage  was to Alleyne Firth [who remarried in 1946]
Alan Haith Blow [1905 - 1989]  became the Borough Engineer in Maldon, Essex.
Best wishes

"Yes it is a bit irrelevant but fascinating nonetheless. Could I use the information you so kindly sent me on my site/blog?. I feel it may lead to something in time and if it does I will of course let you know.
Thanks again for taking the time and trouble to contact me."

"No problem, Chris It's amazing what one finds on the web, and there are some amazing stories out there of ordinary people, like the Firth V.C. I never did find out the link  with Silesia  now in Poland - in those days, there were many aristocratic connections between rich Austro-Hungarian and German families and those of equivilent status in the UK and often their youngsters would exchange.  Perhaps the Haiths worked for one such family.  No other clues. Best wishes,"

As before any further information would be most welcome
Posted by ceegee at 4:54:00 pm