The following cutting is from The Daily Telegraph dated Monday 1st January 1900, the first day of the twentieth century and refers to the inquest that took place two days earlier on the body of James Hynes alias Dunn aka "The Mystery." 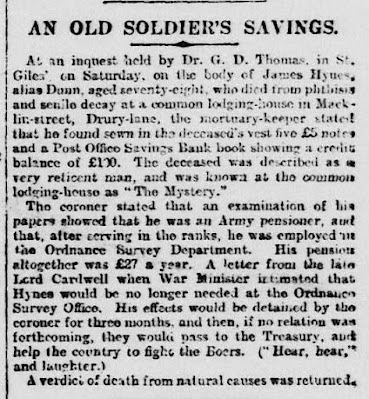 The verdict was in accordance with the evidence - James had succumbed to what is now known as tuberculosis which was exacerbated by the debilitating effects of old age.
What was surprising was that James had on his person when he died £125.00 (about £10,700 in today's money) and was in receipt of pensions amounting to £27.00 per annum (£2,300  in today's money. From the report it looks as though James had no known relatives and so after a period of three months, the monies would be sent to the Treasury "to help fight the Boers". Why this pronouncement provoked merriment and laughter at the inquest is difficult to fathom but so is the fact that a army pensioner with substantial monetary assets die a lonely and painful death at a "common lodging-house" in London
Posted by ceegee at 8:03:00 am