A fellow researcher passed this cutting on to me. It is from The Sheffield Independent dated 30th August 1828. The interesting inquest is the third - that of the late Joshua Spurr who died by the "Visitation of God." I had not heard this phrase before in this context 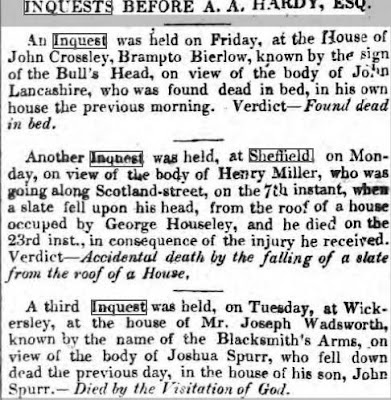 but it appears that is was used when doctors struggled in the darkness over the causes of disease and death, and how the human body functioned. If a person died, because of the doctor's limited knowledge they could only describe the cause of death as a fever, apoplexy, or convulsions, or what he could visibly see such as a head wound, or evidence of a lifestyle such as over indulgence of drink.

Occasionally he would describe the cause of death as a Visitation of God. Used in a more religious time than ours, it meant the death was inexplicable and it was thought that God had decided that it was time for the person to die.

It later came to mean that the person died of natural causes. It was a verdict often given by Coroner's juries, particularly in the 19th century. It was very rare that any autopsy was held and a doctor would give his opinion from the physical evidence of the body before him and the accounts he heard from others of the health of the deceased.

Also the coroner was only really concerned with the detection of crime, so the medical reason for the death did not matter to him once criminality had been ruled out.

In 1837 compulsory registration of Births, Deaths and Marriages was introduced. In an attempt to bring statistical order to the reports made by the Registrar General of Births, Deaths and Marriages on the numbers of such events, coroners were directed that the cause of death were to be made in precise terms. Terms such as Natural Death or Visitation of God were to be avoided where more precise medical terms on the cause of death could be used.

However, there was a slow response to these directions, and it did not overcome the problem of a death where the coroner was not involved. Many doctors continued using the term.